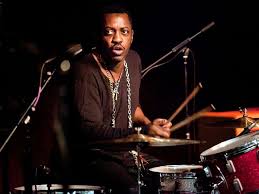 This week we present our latest artist feature highlighting the career of Steve Jordan.
Steve got his major studio break due to a massive snow storm that paralyzed New York City in 1977. Most of the first call drummers lived outside of Manhattan and when travel became impossible Steve was able to make several sessions over a week long period. That act of nature and the ability to take advantage of his opportunities allowed Steve to cement his status as an A-list session musician.

Aside from his prodigious studio resume Steve also has a tremendous live playing career. He was the first drummer for Saturday Night Live. His relationship with Paul Shaffer continued past Saturday night’s and ultimately landed him a five year stint as the house drummer for Late Night with David Letterman. Since that time he’s toured with likes of: Eric Clapton, Keith Richards, David Sanborn, John Mayer, and his own band, The Verbs.

In this show we highlight our favorite Steve Jordan tracks and dissect what makes them great. With Steve’s diverse career we’ll be listening to numerous songs that span such varied genres as: disco, fusion, and Americana rock and roll.

Phil’s picks are:
1. ‘Who’s Who’ from the John Scofield album, Who’s Who
2. ‘Squish’ from the Brecker Brothers album, Detente
3. ‘No Particular Place to Go” from the movie soundtrack, Hail, Hail Rock and Roll
4. ‘Waiting on the World to Change’ from the John Mayer album, Continuum

Jon’s picks are:
1. ‘Snakes’ from the David Sanborn album, Upfront
2. ‘Messin with the Kid’ from the Blues Brothers album, Briefcase Full of Blues
3. ‘Steve McQueen’ from the Sheryl Crow album, C’mon, C’mon
4. ‘Vultures’ from the John Mayer album, Continuum

Honorable Mentions:
1. With Sound Reason, album by Sonny Fortune
2. Electric Outlet, album by John Scofield (used as this show’s outro music)
3. ‘Don’t Get Me Wrong’ song by The Pretenders
4. ‘Possible Straight’ song by Lyle Mays from the album, Street Dreams

Join us every Monday for brand new feature episodes and every first and third Thursday for our ‘practice along’ mini-episodes. We’re available on Itunes, Google Play Podcasts, Stitcher, Soundcloud, and everywhere you access your favorite podcasts. Subscribe today! Also, make sure you visit our web site. We can be found at: www.drummersweeklygroovecast.com At our site you can listen to all of our shows, interact with social media, view our videos, and manage your subscription. Subscribe to us today.

Lastly, if you listen to the show on Itunes, or even if you just have an Itunes account, please a take a moment and leave us a short, written review. It really helps the show grow and allows other people looking for podcasts of our genre to find us.

The North Georgia country side doesn't normally evoke the thought of rock stars. However Interpol…