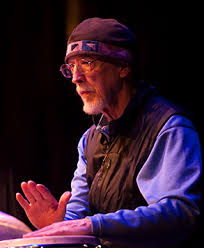 Whether right or wrong we like being different and truly enjoy bringing you guests that challenge, enlighten, and entertain our listeners. This week certainly checks all those boxes. Our guest, George Marsh, is probably best known to our listeners as either the drummer from the David Grisman Quintet or as the author of “Inner Drumming” (one of our genres greatest methods). During my first chat with George he was excited to talk music and was very eager to share some of his favorite recordings of which he was a part. Throughout this episode as George describes the various musicians he’s worked with I thought it would be a nice change to mix in some of those artists’ mp3s as the interview progresses. It’s the first time we done that on the show. We hope you enjoy it and that it adds some context to the conversation.

We caught up with George at his home in Santa Rosa, California. The long-time bay area resident is originally from the US Midwest where he grew up just outside of Saint Louis. His interest in music led him to gigs in Chicago and eventually to study with legendary educator, Tom Siwe at the University of Illinois at Urbana – Champaign. As the 1960s progressed it became clear to George that the weather, music, and culture of San Francisco had a magnetic appeal. Marsh relocated in 1968 and has remained in the bay area since that time. Partaking of the bay area’s fertile music scene George has played and recorded with artists as varied as the Jerry Hahn Brotherhood, Denny Zeitlin, John Abercrombie, Listen, and David Grisman.
We discuss his teaching studios at Sonoma State University and the University of California at Santa Cruz. He details his nearly 40-year tenure at both schools and what he teaches there respectively. We finish having George describe the origin of “Inner Drumming”, the use of graphic notation, the nature of deliberate practice, and the myriad benefits of the method. Of course, we finish the show by taking George through the DWG Rorschach Test! Dr. Zeitlin would be delighted!

Visit George at his web site:  http://georgemarsh.com/  There you can view his media, purchase his book, and contact him for lessons.

Here is an ordered list of songs included in this episode:

Please visit our website at:  www.drummersweeklygroovecast.com There you can listen to our shows, interact with social media, email us, view our videos and more. If you are an Apple platform user please take a moment to review us the next time you are in iTunes. A 5-star rating would be greatly appreciated. New shows are published every Monday and can be found on iTunes, Google Play Podcasts, Spotify, Stitcher and everywhere you listen to your favorite podcasts. Subscribe today

This week we welcome world class bassist Jimmy Haslip to the Groovecast. Jimmy speaks to us from the bassist's perspective of what it's like to play with the world's greatest drummers.

Episode 73 – The Politics of Drumming

We begin our show this week asking our audience for a little help. No, it's…