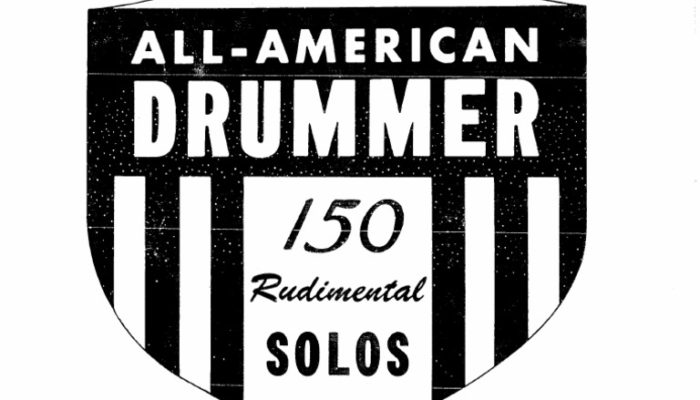 Once again we are back with “Accountability Thursday”. This is our first episode using the Wilcoxon “All American Drummer 150 Rudimental Solos”. We’ve worked from the Swing Solos book previously but this is our first time working in the 150.

I chose solo #9 because it uses several proprietary Wilcoxon notations that are not commonly found in other rudimental methods. One thing that helps with his interpretation is that Wilcoxon specifies the required stickings on every single note of the solo. This allows him to highlight specific rudiments that he wants to use in each solo.

The first thing to notice is the different notations for the seven stroke roll. The introductory roll-off is a seven stroke ternary roll. That style of seven is the preferred and most common way to interpret 8th note rolls in most rudimental literature. We’ve seen it numerous times in previous NARD solos and you’ll use this particular roll three times in the first line alone. The ternary seven stroke is used a total of five times throughout the entire piece.

Another tricky place that may need some clarification is the third line, second measure. Pay attention to the stickings because the drags do not start on the expected hands! The measure begins with a single stroke, accented R, immediately afterward the notated left handed drag forces you to play grace notes on the right when you might expect a L.

For further clarification click here and visit the Youtube video to view the sheet music and see a performance of Wilcoxon Solo #9.

We want you to practice this solo and post your videos on our social media. Make sure you tag the show in your description. Also head over to our web site at: www.drummersweeklygroovecast.com
You can subscribe to the show, listen to all our episodes, see our performance videos, interact with our social media, and get in touch with us there as well. We’ll see you in a couple of weeks with our next mini-episode and every Monday with our full length feature shows.

Rod Morgenstein is one of the preeminent musicians of our time. He is known for…

This week we present our latest artist feature highlighting the career of Steve Jordan. Steve…